It is no surprise that it requires an immense amount of hard work, commitment, dedication, and determination to be a successful sportsman. The constant and regular diets, excruciatingly painful exercises, and other routines are just a couple of what these sportsmen consider “normal.” An individual who knows all about them is 21-year-old Mudit Dani, a renowned international table tennis player, currently studying Management at NYU (New York University.)

Dani is the 2019 US Open Bronze Medalist, which was his first ever International Table Tennis Federation medal, along with being a speaker on the TEDx show, “Life’s Turning Points.” Dani made his debut in the senior circuit in August 2018, where he was initially ranked 774 in the world. However, with the support of his team and loved ones, and his hard work, he rapidly appeared in the top 200, resulting in a rank of #6 in India. Currently, Dani is the host of an Instagram sports live series called, “In the Sportlight,” where he interviews multiple renowned and successful sportsmen, and provides us with an opportunity to gain their valuable insights.

How did this story begin? Dani first started playing table tennis at the age of around 7½ in his leisure time with his friends and cousins. “The first couple of times I played, I surely did love the game. I do remember having a lot of fun, and always wanting to play,” said the talented youth. In 2006, Dani had gone to visit his maternal grandmother at her residence, as she had fallen ill. Dani and his cousins had found a recreational room in the building’s compound, where they started to play table tennis. This was the time when they were witnessed by X National Table Tennis coach, Mr. Ratish Chachad, who was impressed by the youth’s skill and talent. 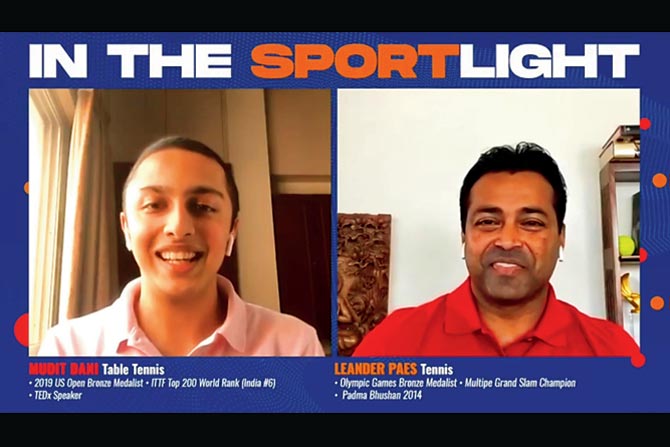 Mudit in conversation with the legendary Leander Paes.

As a matter of fact, Mr. Chachad had offered to train Dani due to the talent he possessed, along with giving him an Indian table tennis blazer on his birthday. Looking at the blazer on a daily basis pushed and motivated Dani to work harder everyday. Since the size of the blazer was too big for him, he decided to work hard and earn the blazer.

“It was something that was really symbolic. I had it in my room then – I still have it with me, of course. It’s for sure the first thing that sort of inspired the whole ‘Team India’ dream in me,” explained Dani. He also added, “When I didn’t want to train – when I was injured, those were the times when it actually gave me that extra push and motivation that I needed.”

Furthermore, Dani recollects that he started playing competitively, and started spending hours on the table when he was around 9 or 10 years old. However, when Dani was 13, he started to observe more power and better movement on the table, nevertheless, the fact that he started exerting his body led to his first major injury. “I was out for about four to five weeks of physiotherapy, nothing was really helping, and that’s when I began yoga,” said Dani.

Suggested by his paternal grand-mother, Dani visited Mr. Bellur Krishnamachar Sundararaja Iyengar’s Yoga Centre in Pune, where he recovered in just a couple of weeks! It was shocking that Dani’s recovery was so spontaneous, considering that his doctors were unable to fix it due to its severity.

“It was the biggest setback in many ways. Being out of the game for 5 to 6 weeks, also, not knowing whether I would ever be able to get back to playing because at that point, I could barely even pick up a glass of water with my right hand as my entire shoulder blade was completely damaged,” described Dani.

Moreover, Dani broke into the top 10 in the juniors circuit, becoming only the third Indian to do so. Even though he had accomplished so much in such a short period of time, Dani refused to get complacent, and started working with the incentive to “take it to the next level.”

Although, due to his studies during the 11th and 12th grade, Dani was obligated to limit his number of days to train. It was at this point when he started to contemplate whether he should pursue table tennis as a profession, or he should continue his further education by going to university like his peers.

Nonetheless, due to Dani’s promising results in the IB, and in his table tennis competitions, he was provided with an opportunity to pursue table tennis on the senior circuit, one he clearly took up. Dani looks up to multiple sportsmen, however, he deeply admires Michael Phelps simply because “he’s a beast,” and due to his positive mentality and work ethic. “I think his dedication towards the sport was just something I loved about him, and obviously the fact that he did achieve everything makes his story even more successful, but even if he didn’t, it’s that work that he put in that sort of inspires me,” says Dani.

Additionally, over the past few years, Dani has mastered the technique of “living in the present” and “staying in the moment.” When he trains, he focuses solely on his training, whereas, when he studies, he focuses completely on studying. Training competitively has also taught Dani the importance of mental health and mental fitness. Dani believes mental health is not only critical for a sportsman, but for society in general, especially during this hard time.

“You just need to have a set routine, and you need to be thinking about the things that you have control on,” explains Dani. Dani says he doesn’t have control over when the corona virus will end, or when his tournaments will resume, nevertheless, he has control over the food he consumes and the exercises he performs, which is what he will be working on.

“The 2022 Asian Games and Commonwealth Games are big goals for me. These are Championships which are two years away but I will give my best to see myself in the squad,” said Dani in another interview. Dani yet intends on achieving that goal by putting in an immense amount of hard work, sacrifice, and compromise in order to make his nation proud. Unlike many sportsmen, Dani believes in the process more than the final outcome. He believes that if you are truly dedicated and work hard, you will be able to achieve your goal. Clearly, Dani is on his way to achieving his goal.

About our Writing Program Student
Zahaan Sabuwala (15) is a Xth Grader studying at Oberoi International School in Mumbai. He’s fond of playing the guitar and is a national-level lawn tennis player. During his spare time, he loves spending time with pets!

Why Football is my favourite sport

Kalaripayattu – the mother of all martial arts