National Geographic Traveller has rated Kerala as one of the Top 10 Destinations of the Paradise Found Category; and I can safely add that Kerala is a paradise for seafood and non-vegetarian lovers as  I have spent quite a few years in God’s Own Country. With lots of spices, condiments, rich in colour, flavour and aroma, Keralite cuisine is one of the most popular cuisines all over the world.

Known for its vast expanse of greenery, tender coconut, Ayurveda, the sea, beaches and beautiful churches, Kerala is a one stop destination for all. But let us take you on a tour on the history of Keralite cuisine.

Kerala has been one of the hotspots of the country since time immemorial. It is therefore, important to begin with the history of this state as believe it or not, history can influence eating habits, just as it influences people.

Kerala is known to have several mythical as well as historical facts about its origin. In fact, the earliest written records are dated as back as the 2nd and the 4th century BC. Its strategic location at the southern tip of India, nestled very close to the Malabar Coast, has attracted several explorers to Kerala. One such explorer whose is remembered in the cosy Fort Kochi area in Kerala is Vasco Da Gama. In fact, Fort Kochi itself dates back to the 15th century that coincides with the advent of the Portuguese. Soon Fort Kochi evolved as one of the prime ports of that time, attracting the Dutch to the final arrival of the British. Kerala is a confluence of Christian, Hindu and Muslim population that leaves it tinge in the cuisines as well. Apart from this, the Portuguese, Dutch and European influences have also left an indelible mark on Keralite cuisine.

The very act or preparing or cooking a meal is known as pachakam in Malayalam, the local language of Kerala. The food items have a distinct flavour of spices and of course, the coconut!

Sea food is a staple diet, along with beef, pork, poultry and mutton in the non-vegetarian sections. Karimeen or the pearl spotted fish is a rare and expensive fish here. Its delicious and tastes fantastic as a fry or a curry form. Seer fish, nanga, cuttle fish, king fish etc are other popular favourites here.

Rice, coconut and curry leaves are omnipresent in almost every Keralite dish. The rice consumed in traditional Keralite homes is the unpolished rice. It’s considered healthier, as its original fibres are retained.

There is a popular drink amongst one and all, and truly outsiders have to develop a taste for the same. It’s Toddy – a fermented coconut drink that does justice to a tapioca and fish curry meal. Another popular drink is the Arrack which is highly intoxicating and usually had with spicy pickles and boiled eggs. Other popular drinks are kanji (rice congee) and payaru (moong bean).
Share your food & travel story with us:
We invite our readers to share their food & travel stories with us and we’ll be happy to publish it. Send us your original write-ups along with pictures clicked by you to tanya@tanyamunshi.com. 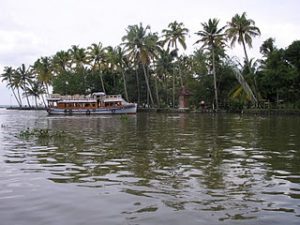 Romancing the Indian Ocean on an island

Udaipur – Soaking in the timeless classic of a royal city